True Fox-sedge Carex vulpina is a robust, tufted sedge of damp soils that was not recognised as distinct from the more widespread and abundant False Fox-sedge (Carex otrubae) until the 1920s.

Where does it grow in the UK?

In the UK, True Fox-sedge is only found in England, in Yorkshire, Gloucestershire, Sussex with strongholds in Oxfordshire, Buckinghamshire and Kent.

Where does it grow in Oxfordshire?

The damp meadow soils of Otmoor and the Upper River Ray appear to favour the plant, with eight sites including BBOWT’s Meadow Farm and Asham Meads nature reserves. It is also present in adjacent parts of Buckinghamshire. The River Ray catchment also holds four sites in Bucks.

Where does it grow in the World?

Despite it’s rarity in the UK, this sedge is widespread and abundant throughout Eastern Europe, Russia and northwestern Asia where it is a dominant species of several wetlands plant communities, to the point of being listed as a weed (Global Compendium of Weeds 2008). However, the species is rare in Western Europe e.g. critically endangered in Finland and rare in Belgium. In contrast, False Fox-sedge is a more western species and possible sterile intermediates have been found in West Sussex.

Does it have a Conservation Status?

True fox-sedge is native to Britain and is Nationally Rare, red listed as Vulnerable in England, and is on section 41 of the NERC Act 2006 as “a species of principal importance for the conservation of biodiversity in England”.

True Fox-sedge is a perennial of floodplain meadows and ditch banks in calcareous areas, and tolerates moderate nitrate levels. It sometimes survives in shady places as near Otmoor it grows under full canopy in what is probably a 19th Century oak wood on ridge and furrow. At the Meadow Farm BBOWT reserve it grows in the furrows of a ridge and furrow hay meadow, while at Fox Covert it is found in ditches adjacent to arable. Meadow management does not seem to be detrimental, though grazing can be, and where mown the species does not form the loose tussock that it does where undisturbed.

True Fox-sedge grows readily from seed, and when one head was collected for morphological work by Colin Smith, 38 plants were grown on and used to reinforce the population at Asham Meads BBOWT reserve (Murcott Meadows SSSI). In Buckinghamshire, BBOWT has also introduced seedlings to bolster the local populations.

Recording of plant condition goes on at various sites, looking at both the plant growth and flowering success. Plantings made to reinforce native populations are also monitored. These surveys are important to check that the Oxfordshire sites continue to be a stronghold for this species. Management at the BBOWT reserves seems to suit the species well, maintaining robust plants and abundant flowering, though seasonal variations in rainfall / droughting clearly affect plant condition and growth, and may influence browsing by deer, which in some years can ravage the flowering heads. 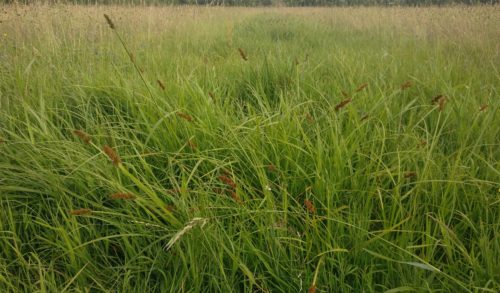 If you would like to help in this work, or take part in the monitoring of the species see the Oxfordshire Flora Group events programme.